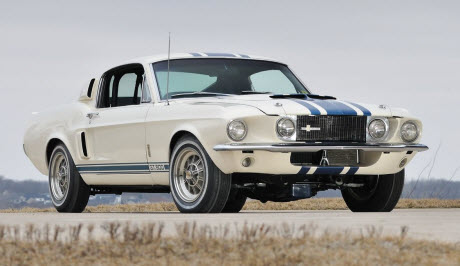 <![CDATA[Back in 2008 this very rare one off car popped up on eBay, <a href="http://67mustangblog.com/2008/01/ebay-find-1967-ford-mustang-gt500-supersnake-one-of-one/">reported here. after that we’re not too sure what happened to the vehicle, though given the $3 Million price tag we can assume it may not have sold. Fast forward a handful of years and the car is back. This time set to cross the auction block at Mecum’s 26th Original Spring Classic Auction in Indianapolis. Shelby originally wanted to build 50 Super Snakes which would be sold exclusively through Shelby dealerships as an alternative to the 427-powered Camaros and Chevelles and 426 MoPars which were in a league above the standard Shelbys. However when all the costs were added up the sticker price came to a whopping $7500, which in those days was quite a substantial amount of money, so the whole project was shelved and the car was eventually bought by two airline pilots who dragged raced it on weekends. Two subsequent owners remain unidentified today, but records show that the car was purchased in 1970 by Bobby Pierce of Benbrock, TX, who cared for it for 25 years before selling it to David Loebenberg of Florida. The Super Snake returned to California 7 years later when it was bought by Charles Lillard, who later sold it to Richard Ellis, a collector of rare Mustangs in Illinois, at which point the car registered 26,000 miles on the odometer and showed almost no deterioration. Ellis proceeded with what he describes as a “light restoration”, locating the correct wires and hoses for the engine compartment, a period-correct Rotunda fire extinguisher, NOS Shelby 10-spoke wheels and, amazingly, four brand-new Thunderbolt whitewall tires in the proper size. As Ellis explained in a September, 2011 interview with Auto Enthusiast Magazine, “I wanted to own this piece of Shelby history worse than anything. It was well cared for by its previous owners, but I’ve put a lot of effort into returning it to the state it was in on the day of the tire test.” “The Thunderbolts were made for … well, boring family cars in the ’60s, which is why nobody reproduces them or has even heard of them for 35 years. I found what has to be the only surviving set in a warehouse in Akron, Ohio. I’m sure Shelby pulled the original Thunderbolts and threw them away when the car got back to California. “Now, when you see a picture of the Super Snake and it’s got skinny whitewall tires, you’ll know it is either from the Goodyear test or from the time it’s spent in my collection.” Built with the heart of a Le Mans champion yet ultimately destined for but one day in the sun, there is only one Super Snake, the result of a confluence of forces that could only have happened in the charmed life of one Carroll Shelby. The car is scheduled to cross the block May 17 at approximetly 5:30pm. [gallery] [Source] via [Supersnake]]]>