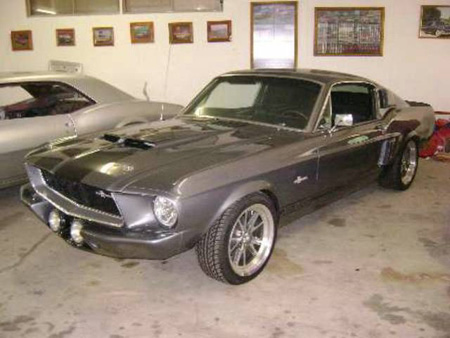 Eleanor replicas on ebay are no big deal these days, just see here. But you don’t often see them on ebay in Australia. I previously reported on one that was up for sale. Not the best car but good to see one in Australia. Now another has popped up. Again this one is kind of a half-replica. Parts of the kit, the paint and the wheels. By the look of it the lower valance has been used but not the upper front valance and for this reason they have used a standard hood. Keep in mind that the ‘Eleanor’ hood is longer than a normal 67 hood. So without the ‘Eleanor’ valance the Eleanor hood would stick way out over the front. Standard Shelby upper scoops have been used along with standard Shelby rear end. The interior is well, far from special. I can’t tell what kind of upholstery has been used but it doesn’t look to fitting. The shifter appears to be a hurst and that’s about it really. It’s disappointing to see people making these unimpressive builds and then trying to cash in on the ‘Eleanor’ name. It’s cars like these that gives ‘Eleanor’ a bad name. If one was to buy this it would be to strip it down and give it a good going over. That’s just my two cents.