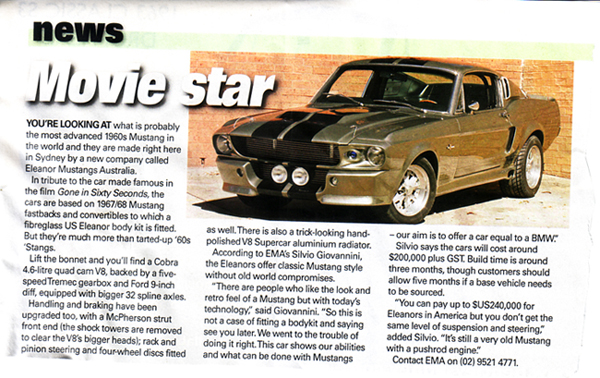 Early last year the Australian magazine Unique Cars ran a story with a new company called Eleanor Mustangs Australia. The story, below, got me a little worked up due to the fact the makers of this clone were claiming so much, yet the car in their story was obviously far from a clone. and they were offering them for an absolutely absurd price. For that money you could buy one from Unique Performance and it would be an official Shelby continuation vehicle included in the registry.

I ended up sending in a reply which i was told got published, unfortunately i don’t have a copy of what i wrote. but here are some comments from members of the Justmustangs forum.

they are definitely pricey – from memory about $140,000 —- EVEN MORE if they had to source a fastback for you!!! Shocked

and there wasn’t a very specific list of what you got for that kind of money.

ps. Unique Cars sorta redeemed themselves the following month by publishing a letter from someone saying just how poorly they compared to Unique Performance cars in the US price wise.

It’s worth noting that late last year the companies site, which wasn’t really updated or informative, was taken down and it appears that the company has gone under or folded. A few of us emailed and tried calling them when they were a float but not one of a us got a reply.

While i do love and encourage more quality builders keeping these classics alive and reviving some from the wreckers, I’m not too fond of those in it to make a quick buck. Much like what is happening in the states right now with the MPSS Eleanors and the people who lost all their money.