I managed to come across this interesting story of the early sixties Mustang prototype and how it turned into the 60’s Mustangs we all know and love today.

So here’s how the story goes. In 1962 to bring in more new ideas, a competition within Ford was encouraged. “The design team headed by Joe Oor, Gayle Halderman and David Ash won the competition with their design they called the “Cougar.” While the Oor team was busy moving the design into production, Ford felt a show prototype was needed to whet the public’s appetite”

This plan nearly turned out to be a misstep for Ford. Ford’s eagerness to show the car gave
their competition a head start on planning their own stable. There is little doubt that the
Chevrolet Camaro, Pontiac Firebird, American Motors Javelin, and Plymouths drastically restyled
Barracuda were all responses to Iacocca’s new “Pony Car.”

The new prototype bore a closer resemblance to the production Mustang. Styling cues such as
rear quarter trim, taillights, jutting grille, and a number of other detail hints would later find their
way into production. The prototype was touted as the ‘Two-Plus-Two’–a car built for two with
the addition of the small rear seat, making room for four. The Mustang II made its debut at the
Watkins Glen track in the spring of 1963 and wowed the crowds at the auto shows. This
Mustang now resides the Owls Head Transportation Museum in Owls Head, Maine.

Final designs were complete in late 1963, and tooling began in the Dearborn Assembly Plant. In a
time when all the design work was being done on the drafting table, most new cars took 3-4
years to reach this point. It had only been 18 months from the time funding had begun on the
project. This was a remarkable feat in the early 60’s and reflected well on Ford’s Leadership.

By February, the news was out on the Mustang. The following $10 million advertising and
marketing campaign would set new standards in the industry for release of new vehicles.
Targeting the younger generation, Ford heavily courted the female buyer for the first time. With
tag lines such as “Life was just one diaper after another until Sarah got her new Mustang” and
“Mustang has become the sweetheart of the Supermarket Set,” Ford’s strategy to target
younger woman was met with tremendous success.

February 7th, 1964 – Detroit Mich. “Today, the Ford Motor Company confirmed that it would
introduce a new sports-type car, the Mustang. Already dubbed the “Poor-man’s Thunderbird,” the
new four-passenger car will sell for under $2,500. The Mustang will have a Uni-body design,
having a 108-inch wheelbase, 5 inches shorter than the Thunderbird, and will be about 185 long. A
six-cylinder will be standard, and there will be three optional V-8 engines.”

The men were not left out of Ford’s plans for marketing their new car. The Mustang was billed
as a sporty car for a new breed. Simply purchasing the new car would transform you from Joe
Six-Pack to a successful ‘man about town,’ complete with the ladies. Ads read, “Two weeks ago,
this man was a bashful schoolteacher in a small Midwestern city. Add Mustang. Now he has
three steady girls, is on first-name terms with the best headwaiters in town, is society’s
darling”?. Ford’s ad campaign for the Mustang made owning the car just like joining a club. The
term “Mustangers” would go on to idealize Mustang owners as part of a fraternity and was just
another element in the Mustang’s great appeal.

As the ad campaign geared up, so did production of the new car. Production of the Mustang
began March 9th of 1964 at the Dearborn Assembly Plant. Within 30 days, some 9,678 cars had
been produced. With enough production cars for display, Ford was ready to unveil the Mustang
to the public for the first time on a grand scale.

The new car first made its debut at the New York World’s Fair on April 13th, 1964. First showings
were at the Ford Pavilion to invited members of the press, time enough for news reviews to
start showing up in leading magazines in efforts to bolster the public unveiling on April 17th,
1964. By this time, the Mustang was in dealer showrooms, covered from public view. As media
hype was at its peek, the unveiling of Ford’s new “Pony Car” drove over 4 million people to
showrooms across America the first week. During this same period, over 30,000 cars were
ordered.

As production requests reached very enthusiastic proportions, assembly plants were opened in
San Jose, California and Metuchen, New Jersey. By summer of 1964, over 160,000 cars had
been produced. Owing its quick production time to the use of many “off-the-self” parts designed
for the Falcon and other Ford products, production of the Mustang soared

Only 18 months had elapsed since the Mustang had been approved for production until the first
unit rolled off the production line. Production costs were always a concern at Ford. In order to
control them, many of the components for the Mustang were “repurposed” production parts
originally used on the the Falcon. This included the engine, transmission, rear end and
suspension.

Some may wondered where this prototype is now? destroyed? well no, it’s actually on display at the Detroit Historical Museum. Here is what the museum says about the car.

Automobile, this 1963 pre-production Mustang is basically the same car that would be introduced as the 1965 Mustang. This particular car was altered and exhibited at a number of auto shows. It is a convertible equipped with removable fiberglass top, 289-cubic inch, high performance, Cobra-modified engine and four-speed manual transmission.

The Mustang was Lee Iacocca’s contribution to Ford Motor Company’s line of cars. The first Mustang was tiny and European in appearance. After much redesigning, the very American Mustang II came into being. The slightly restyled production Mustang was an instant success with 417,000 selling in its first year, becoming as well known in Rio, Rome and Rangoon as in Racine. 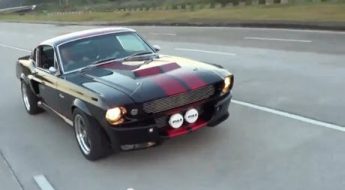 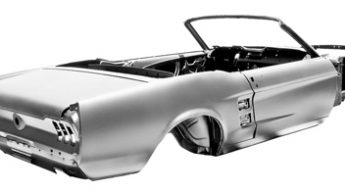 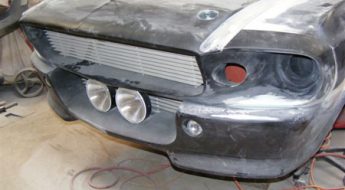