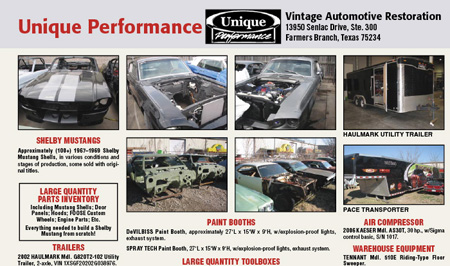 Over 100 former Unique Performance Mustang shells in various stages of production are up for auction in an effort to recoup the some $900,000 odd to the IRS after Unique Performance filed for bankruptcy. The auction, being held on March 27th, is run by Rosen Systems, a Dallas based auction house. The brochure states that there are over one hundred 1967-1969 Shelby Mustang shells in “Various stages of production, some sold with original titles” along with Mustang and Camaro; Doors, Panels, Hoods, FOOSE Custom Wheels and Engine Parts. Also being sold off are various Unique Performance tools and utilities including spray-booths and trailers. So if you’re heading down to pick up a bargain remember these shells have been sitting out in the elements for a good few months. If you’re heading to the auction be sure to take some pics and send them our way. [Source] via [Jalopnik]]]>