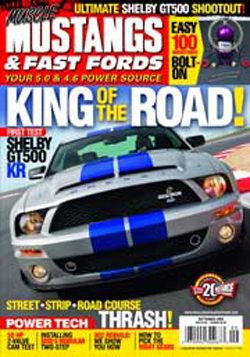 Earlier this year I was contacted by the guys at Muscle Mustangs & Fast Fords magazine asking if they could do a small write up in their magazine. Obviously I agreed and after answering some questions I was told the article would appear in the September 08 issue in the Cyber Stallions column. Now because I am in Australia I was unable to get a copy and I have been told the Cyber Stallions column has been cut for the latest issues, so I’m not 100% certain the article actually made it to print, so if anyone has it please let me know. Here is the article if you feel like a read. If anyone has the issue feel free to send me a scan! Cyber Stallions MM&FF Sept 2008 An Eleanor from Down Under By Jeff Bauer Think it’s hard doing a Mustang project car in the United States? Try doing one in Australia. “I think it’s slightly more difficult (in Australia), but not by much,” said Cameron O’Shea, a 25-year-old Sydney resident who is documenting on his 67 Mustang Blog (www.67mustangblog.com) the transformation of his ’67 Fastback into an “Eleanor” from the 2000 remake of Gone in 60 Seconds. “With the advent of the Internet just about any part is available at your fingertips. The downside is obviously shipping, but everything is manageable.” O’Shea purchased the fastback—a very straight, rust-free specimen with a 289 and a C4 that came from Southern California via China—off eBay in July 2004. He started his blog in late December 2006 to “post all my thoughts, my updates, my photos, my impatience, and of course the state of my dwindling back account.” Although O’Shea is not a mechanic or restorer and is having the work done by John Stephens, a friend with the necessary expertise, the amount of research he’s put into the project is astounding. “I tend to spend most of my time online sourcing, researching, and ordering parts that are hard to find, like the authentic French-made steering wheel,” O’Shea said. The steering wheel saga is just one of many stories that make 67 Mustang Blog an entertaining read. O’Shea wanted the exact steering wheel used on the movie Eleanor, which he’d learned was a 15″ laminated mahogany Lecarra Mark 3 Supreme Tear Drop wheel with a 1.5-inch dish that was produced in the company’s French factory until about 2002. After patiently waiting for months, he was finally able to purchase a U.S.-manufactured Lecarra—only to discover it was not the same as the movie wheel. So he sold it on eBay and resumed his search. The kicker? Soon after, a friend stumbled across the exact steering wheel for sale at a random auto parts store close to O’Shea’s home! O’Shea snapped it up; later, he came across someone who sold a “correct” wheel on eBay for $513! O’Shea shares honestly about all aspects of his Eleanor project: the research, the parts chase, the successes, the delays, and the setbacks. Many posts are accompanied by multiple photos or video, and are written in a way that not only tells O’Shea’s story, but also provides valuable information to other owners. Don’t forget to check out the Comments to the posts–there’s quite a bit of gold there as well. O’Shea goes well above and beyond the call of duty to answer his visitor’s questions as best he can. Probably the best way to approach 67 Mustang Blog is to simply start with the archived December 2006 posts and read the entire site chronologically. But posts are also grouped so you can read everything he’s written in seven categories, including Body (he’s using an Australian-made Eleanor kit), Parts, Project Updates, and more. You also can view the Sitemap for an index of all posts, or the Most Viewed category to see what others have found interesting. Between project car updates, O’Shea blogs about Mustang topics he finds newsworthy. The most popular of these by far has been the saga of Unique Performance, a Texas-based restoration shop that apparently started with high hopes but in many cases failed to deliver, eventually going bankrupt and auctioning off its assets, leaving 143 people without their cars or their money amid allegations that the shop removed or destroyed VINs of more than 60 vehicles. Other topics O’Shea has covered—with tons of photos and videos as well as words—include Dynacorn’s ’67 and ’68 Mustang fastback “replacement” body shells, a ’67 Mustang project that was lost in a fire, photos of fellow Mustangers’ projects, and coverage of local car shows. So what’s the Mustang scene like in Australia? “I have been to a few All Ford Days and was surprised at the amount of Mustangs. I noticed a lot more vintage Stangs than late-model ones,” O’Shea said. “I know some vintage guys cringe at the thought of my ‘restomod’ but hey, I’m young, so I don’t really care. It looks unreal so I’m going for it.” Thanks To Jeff and the guys at Muscle Mustangs & Fast Fords magazine]]>