I stumbled upon this beast earlier in the week. I know it’s heavily modified but hell it’s worth a post purely for the amount of work these guys have put into it. At a quick glance the car runs a bored and stroked 427 Carroll Shelby engine, a Tremec TKO 600 and air suspension.

Named Naja, which I believe is another word for Cobra snakes, the car was built by a family of Mustang lovers, this one for the wife of the family. “We began looking around for a nice ’67 or ’68 fastback that would suit our needs. We finally located a car in Southern California that was being driven by an 18-year-old high school senior who was reluctantly selling the car to support his future college education. We liked what we saw, purchased the car and drove it to our home in Sacramento, California.”

The car was handed to the guys at FE Specialists who built up the engine, an aluminum 427 that would produce over 700 horse power.

The site has a complete run down of everything it took to build it, and when i mean complete I truly mean it. The site is broken out into the different sections such as; engine, interior, exterior and many more.

I highly suggest you check out this beast. Though the only thing I don’t like is the side ways opening bonnet.

Power: Dynamometer results, without the NOS system, produced 705 horsepower at 6300 rpm and 639 lb-ft of torque at 5000 rpm using Sunoco 110 fuel. Another 200 to 250 horse power is expected with the NOS system activated.

Transmission: A Tremec TKO 600 five speed with a McCloud aluminum flywheel and clutch assembly, a Tilton hydraulic throw out bearing and a Lakewood bell housing.

Chassis
Frame: Art Morrison muscle car Max-G frame which was CAD engineered to consider the engine specifications, tire and wheel size, front and rear suspension components and braking requirements. The frame is mandrel-bent 2×4 steel with passages for the side exhaust and driveshaft which allow for a low center of gravity and ride height.

Suspension: The Air Ride Technologies Ride Pro system components have found a home in the trunk area of the car and control the ride height of all four wheels using a Thomas compressor with a three-gallon tank and four way solenoids. The car is capable of attaining a ground clearance of less than 2 inches. Art Morrison’s steel tubular control arms provide precise steering control along with an AGR power assisted modified Mustang II rack and pinion system.

STYLE
Body: The only remaining Ford Mustang component of this car is the body shell, and it was extensively modified with an Eleanor style body kit which included the fender flares, upper and lower side scoops, trunk lid, hood and front fascia. All of these modifications were tediously fiberglassed in to give the car a molded seamless appearance.

Interior: All interior and trunk panels were custom fabricated and covered with black leather including the upper and lower consoles and upper dash pad. The dash instrument bezel is filled with Classic Instruments Carroll Shelby edition gauges. The running lights, fog lights, fuel pump and fans are toggle switched inside the lower console along with the Air Ride control module. 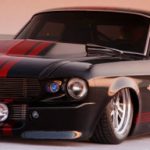 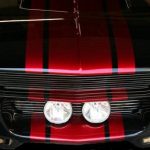 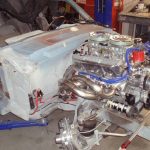 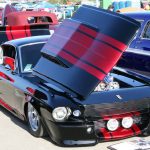 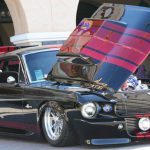 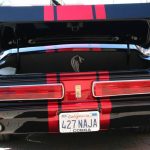 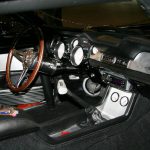 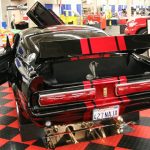