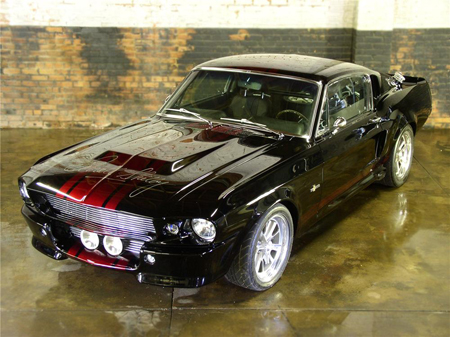 Well this one came a bit out of left field. Riley PM, You may remember as one of the two companies Shelby authorised to finish off those cars from Unique Performance which were either unfinished or had problems. Though this week at the Barrett Jackson auction in Las Vegas Riley PM auctioned off the first of their Shelby Continuation vehicles. The Shelby GT500 SE. Now i’m not sure what the deal is here. Are they doing what UP was? Are they now building Eleanors under a new name? Either way they have Carroll Shelby’s blessing to use his name. So expect to see these cars with Carroll Shelby signature seats, gauges the works. But back to this car. It sold at auction for a whopping $330,000. “The 1st continuation GT500SE Super Snake to be produced. Powered by a Supercharged aluminum Shelby 427 FE with 780hp. Features include the Tremec TKO 5-speed and coilover suspension. Signed by Carroll Shelby at Barrett-Jackson, Palm Beach. ” She certainly looks great. Here are the full details from the auction: “This is the 1st continuation GT500SE Super Snake produced by a licensed Shelby builder under a recent agreement with Carroll Shelby Licensing allowing select builders to produce a very limited number of GT500SE continuation Shelbys. The GT500SE continuation Shelby line will likely become one of the most exclusive vehicles in the Shelby registry with the GT500SE Super Snake at the top of the line for performance. It is powered by a 780hp all-aluminum Supercharged Shelby big block 427 FE engine and is one of the fastest Shelby cars on the road today. The Tremec TKO 5-speed transmission and Currie nodular 9-plus rear-end is designed to deliver more horsepower to the rear wheels. It is equipped with front and rear coilover suspension, Baer Brakes and the Chris Alston Chassisworks power steering system to significantly improve handling and performance on the street or the track. The PSE wheels and G-Force tires provide both style and performance. The exterior styling is further enhanced by sequential tail lights, the Cobra-style LeMans gas lid, Shelby emblems and PIAA front lights. It has been painted Vivid Black with Hellfire Candy Red stripes to provide an even more striking appearance. This GT500SE also bears the signature of Carroll Shelby across the hood of the car, which it had the honor of receiving at its début during the 2009 Barrett-Jackson Palm Beach Event. It is one of the most impressive Super Snakes ever built and it delivers a level of performance that very few cars in its class can match. The interior includes the GT500SE badging, Shelby-style gauges, center console and the package tray with the PSE spare tire. The 5-point racing harness and leather interior provide both comfort and safety. The modern air conditioning system keeps the interior cool and the stereo supplies great sound without drowning out the roar of the engine. Don’t miss this opportunity to own the 1st Shelby GT500SE Super Snake to be produced. It is an incredible machine. Barrett-Jackson has been notified by the seller of Lot 701 that there is a discrepancy between the VIN on this vehicle and the title issued in the State of Texas. The seller has discussed this issue with the appropriate agencies in Texas, and will work with the successful bidder to ensure the issue is resolved satisfactorily.” [gallery]]]>