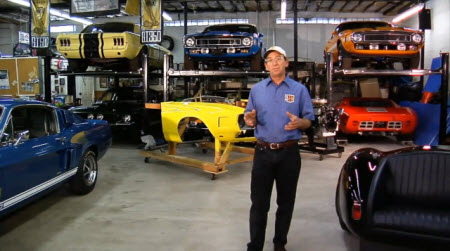 Back in January we posted about R&A Motorsports shop manager Jeff Yergovich and his efforts to have his Mustang themed reality TV show ‘American Pony Builders’ snapped up by the networks. The bad news is Jeff was unable to gain any support from the networks and has now turned to funding platform Kickstarter.com to have a 22-minute pilot funded.

“We are trying to raise money to fund a video for network and TV producers to show them why a television show about Mustangs and the people who love them will be a great idea.” Said Mr Yergovich.

“American Pony Builders will highlight the Mustang, the people who love them, the events (carshows, auctions), the vendors who sell parts or make parts, the manufacturers who make aftermarket parts (like Classic Design Concepts, ProCharger, etc.), the restoration processes, performance and restyling upgrades, and everything in between.”

We wish Jeff and his team all the best.

« Previous post
Maharajah Of The Road: Paris Gran Turino Documentary
Next post »
A Day At The Goodwood Festival Of Speed