It was only several weeks ago that Dynacorn and Ford announced their latest reproduction body shell. The 1965-1966 Mustang shell. Well only a week or so ago the surprisingly added yet another body shell to their stable. And this time it’s the 1967 Mustang Convertible.

It’s the newest officially licensed Ford Restoration part and is now available to order starting at $15,995. It is the fourth reproduction classic Mustang body available to restorers, joining the ’65 convertible, the ’67 fastback and the ’69 fastback.

The really cool thing about these reproductions shells is that they not only are an exact copy of the original but they are even better. To qualify for the official Ford stamp of approval they need to exceed the original ones in fit, strength and other properties. These shells are built for restorers and giving them a solid base to work with is of the greatest importance along with modern day safety standards of course.

Dynacorn International, manufacturer of the ’67 convertible body, worked to not only replicate the original ’67 convertible, but make it better. The body panels, for example, are stamped from modern automotive-grade virgin steel that is slightly thicker than the original, according to Jim Christina, Dynacorn general manager. Then, to further add strength, the panels are assembled using modern welding techniques. There are also newly engineered reinforcements in known stress areas to add strength and rigidity to the body, added Christina.

“These days, the chances are fairly slim of finding a restorable, rust-free ’67 Mustang that has never been wrecked,” said Mondrach. “As the value of classic Mustangs has increased over the years, garages, barns and scrapyards have been picked clean.”

Now, Mustang fans dreaming of restoring a classic ’67 convertible – or building one with a modern powertrain – won’t have to spend time and money getting an original ’67 convertible body into restorable condition. That expensive, time-consuming step can be skipped by starting with the new ’67 convertible body. “Some minor panel adjustment and alignment still has to be done, but the body comes rustproofed and primed and is otherwise ready for painting and assembly,” said Mondrach. More information about the ’67 body shell and all other Ford-licensed restoration parts can be found at www.fordrestorationparts.com.

After a record-setting production run that saw more than a million Mustangs gallop out of Ford factory gates in just 18 months, the 1967 model was given a major redesign. The move helped keep Mustang ahead of the pack as new competitors from General Motors and Chrysler along with imported sports cars from Great Britain claimed a larger share of the mid-1960s youth market.

No part of the Mustang was overlooked in 1967. The body was widened, the hood lengthened, and the engine bay grew in size to accommodate an array of six engines ranging from a thrifty and peppy 200-cubic-inch inline six-cylinder all the way up to a thundering 390-horsepower 427 that came in the Shelby GT500. This helped launch an entirely new generation of big-block high-horsepower pony cars that fueled the growing muscle car mania.

The ’67 also got all-new sheetmetal, a redesigned grille, new taillights and a nifty option that put turn signals in the hood scoops. On the inside, the more luxurious interior took the Mustang in a new direction. Buyers could opt for a tilt-away steering wheel, a gauge package with a built-in tachometer, brushed aluminum trim on the dash, door panels and shifter console. There was also a roof console with map lights between the sun visors, and the ’67 was the first Mustang with built-in air conditioning that was packaged behind the dash, not under it.

Because more than 90 percent of the parts needed to restore a 1967 Mustang convertible are available new as Ford-licensed reproduction components, the ’67 convertible body can be built to just about any specification that was available when the car was new. Ford’s big-block engines from that era, including the 390, 427 and 428-cubic-inch motors, bolt right in with no modifications necessary. Also, the ’67 body can be used as a basis to build a replica of the Shelby GT350 or GT500 convertibles.

“The ’67 convertible body is supported by thousands of high-quality Ford-licensed restoration parts,” Mondrach said. “So, though it may be possible to build a 1967 Mustang using almost all new parts, we think most customers who buy the ’67 convertible shell will use it for high-performance applications, resto-mod projects or for show cars.” 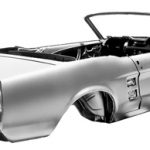 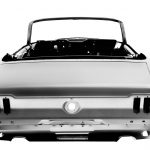 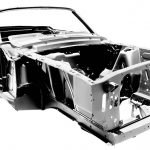 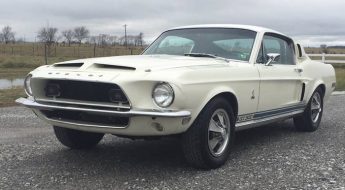 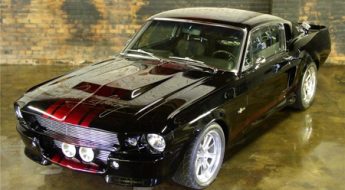 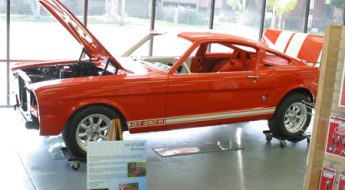