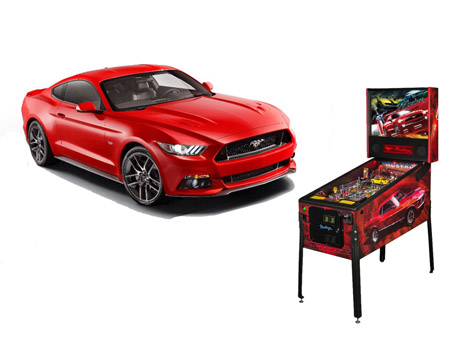 <![CDATA[The all-new Ford Mustang headlines a trio of new pony car-themed pinball games to be revealed at the Chicago Auto Show. Crafted by Chicago’s own Stern Pinball, the Mustang-inspired games combine two prime examples of 20th century American pop culture – the coin-operated pinball machine and the original pony car. “For five decades, Mustang has represented some of the best of American culture, inspiring a feeling of freedom and independence for people around the world,” said Steve Ling, Ford car marketing manager. “We’re excited to have Stern Pinball join us here in its hometown of Chicago with its brand-new games featuring Mustang.” Stern is introducing three new Mustang-themed games this spring featuring cabinet and backboard artwork that pay tribute to 50 years of Mustang. The pro-level machines, designed for arcades and other public spaces, feature Mustangs from the past five decades. The more feature-rich premium edition focuses on Mustang Boss 302, Boss 351 and Boss 429 of 1969 to 1971 and 2012 to 2013. Stern Pinball is one of many companies producing officially licensed products to celebrate 50 years of Mustang. Other licensees include Mattel with a 50 Years of Mustang Hot Wheels collection, Caddyshack with a limited-edition <a href="http://merchandise.ford.com/product/ford-mustang-fifty-years-limited-edition-golf-carwhite">Shelby GT500 Mustang golf car and the Mustang GT pedal go kart from Berg. A range of apparel and other products are available from shopfordmerchandise.com. The all-new 2015 Mustang makes its first Chicago appearance at the auto show alongside six of Stern’s pro-level Mustang games. Top-ranked competitive pinball player Zach Sharpe will also be on hand to demonstrate the new game and set benchmark scores for show visitors and media to challenge. A special limited-edition model signed by the game designer features the 1965 original and the all-new 2015 Mustang. Both premium and limited-edition games feature genuine chrome Mustang badges on the speaker grilles. “The first car I ever bought was a 1970 Mustang Sportroof with a 302, and I’m currently restoring a 1969 Mach 1,” said George Gomez, executive vice president for game design, Stern Pinball. “In designing these new games, we wanted to celebrate the freedom and fun of driving Mustang.” Check out this video about the Stern Mustang pinball games. [gallery ids="7507,7506,7505,7504"] [Source]]]>