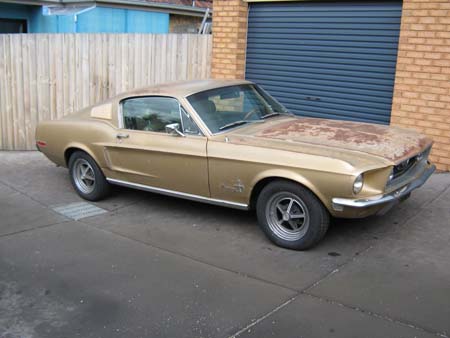 It’s not too often you will find someone who owns not one but two Eleanors but that is just the case for one of our readers, Adam. So you may ask, isn’t one Eleanor enough? Why two? Well Adam has a plan because unless you are made of money, building two cars will be very costly. So to pay for these cars Adam says “I am planning to eventually pay for these cars by driving them in weddings and for special occasions.” Adam says he always wanted a signature car, but the problems were finding one, maintaining it and of course the cost involved so he settled on the Mustang “The Mustangs were a good choice because they are very popular so parts are easy to get. The Eleanor Mustangs are great too because they are exclusive. We are building two Eleanor fastbacks to run with our chauffer and wedding car business. One is Left hand drive and one is Right hand drive.” From the sounds of it Adam has done his homework, already looking into the tax implications and benefits of owning the cars under a business and of course the income the business itself generates from the cars. But back to the cars. Adam has decided to call his cars ‘Eleanor’, a LHD formerly gold car and ‘Angelina‘ a RHD car which was formerly a primed shell. Adam says “The first fastback I bought (Angelina) was a 68 primed shell “ready for paint” only it wasn’t. It had 65 rear quarters, a 65 front etc. and a few other major problems like the high fill wasn’t sticking to the primer. I didn’t know this at the time of purchase but at least there was no rust and it came with a heap of new parts, all the seats, liners, etc. $20k worth of a shell essentially although it did come with all the paperwork to register it and a motor and gearbox (although the motor had to be rebuilt).” “I had gotten onto some guys who really know mustangs who had a look Angelina and said they could get it cleaned up and painted with all the right bits for a price I could live with! They could also do all the bits required to complete the car from there. Once I did the maths on what a registered as new fastback was worth I gave the green light – still with the intention of selling it. So the boys started work on straightening out Angelina and once the body work was done I was offered to sell it and I would have got my money back- all of it… but I couldn’t do it. I wanted to see this car restored fully into something great.” Currently Adam’s Angelina is undergoing some work but what about the other car? Eleanor? well Adam explains “She started life in California as a gold 68 fastback Mustang with a 289 v8 and c4 auto! It had two owners in the states both in California where the car was made and then it sold to a guy in QLD, Australia who brought it out here and then sold it to me for $AUD35,000.” “The car was in such good shape and had obviously been cared for in fact one of the panel beaters who does a lot of Mustang work said it was one of the best three he had ever seen and that he didn’t know you could still buy cars like it. Not one panel had to be altered and there was no rust anywhere!” “I got a road worthy certificate for it and got it registered in my name. As is and driveable with all fees paid it owed me $AUD40k. At that time I had an offer on it of about that from a guy who just missed out on it from Carsales.com but I couldn’t let her go.” So two cars and the lure of the Mustang was too strong for Adam. Owning a Mustang myself i can fully understand this feeling, there is something about the Mustang that makes me wonder if I can ever sell her when she is finished. Take a look at Adam’s pictures below and stay tuned as the updates from Adam and coming thick and fast. [gallery]]]>