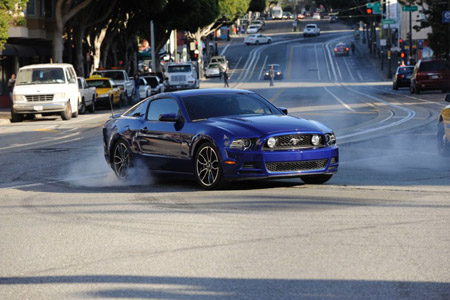 If you’ve been watching JJ Abrams’ Alcatraz TV series on FOX you most probably have noticed the Bullitt Mustang appearing in the background. There’s no coincidence the producers chose a Bullitt Mustang as Detective Rebecca Madsen’s car of choice, after all, the series shares the same streets of San Francisco as the famous chase scene from the movie Bullitt. So it’s quite fitting that the season finale has included a tribute to this original scene, this time with a 2013 Mustang. “We’re just trying to recreate every single shot and add some more, so a lot of sliding around the corners, a lot of getting close to things,” says stunt driver Jack Gill. “It’s really easy to drive around slow, but when they say come around it at 70 miles an hour, it’s a little different.” said Gill “They knew exactly the streets we need to recreate the car chase, so we’re actually on some of the streets, which is fun,” says director Jack Bender. The episode aired last week in the states. So depending where you are in the world you may see it soon. Otherwise, have a look below. [gallery]