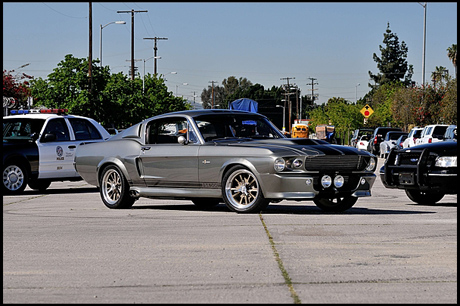 <![CDATA[Only 12 cars were produced by <a href="http://www.cinemavehicles.com/">Cinema Vehicle Services to be used on the 2000 remake of Gone in 60 Seconds and reportedly only 7 remain after 5 were totalled during filming though it seems every year one or two come up for auction. This time it’s the guys over at Mecum Auto Auctions who have a nice example set to go under the hammer this May. This one from what we can see by the VIN’s is not one of the others we have reported on in the past. Most notably the one that sold at the COYS auction at Autosport International in England last year. This particular example appears to be one of only three ‘hero’ cars used during filming. These hero cars were used for closeups, promotional shoots and actor dialogue scenes. “Eleanor has become one of the most widely recognized movie star muscle cars in the world, so when the decision was made to offer the ‘Gone in 60 Seconds’ Hero car for sale, Mecum’s Spring Classic auction in Indianapolis seemed like the perfect venue,” commented Ray Claridge, owner of Cinema Vehicle Services. The car is expected to roll across the block on Saturday May 18. Thirty-two hours of the Indianapolis auction will be broadcast live on Discovery’s Velocity Network with the entire auction streaming live on Mecum’s website at www.mecum.com. Gates open at 8 a.m. each day and general admission can be purchased at the door for $20 per person; children 12 and younger will be admitted at no cost. For more information on the auction or to register as a bidder, visit www.mecum.com or call (262) 275-5050. Head on over to Mecum’s site for the full listing HIGHLIGHTS – Hero Car used in Touchstone Pictures “Gone in 60 Seconds” – Nicholas Cage’s primary beauty car used for close ups – Featured in all movie poster and promotional efforts – VIN: 7R02C179710, built by Cinema Vehicle Services – This car started the “GT500 Eleanor” epidemic – The most recreated car since the Shelby Cobra – Presented in movie-used condition with minor touch ups – 351/400 HP Ford crate motor, 4-speed manual – Power steering and brakes, Go-Baby-Go shifter button – Lowered suspension, coilovers, PIAA driving lights – Schmidt 8×17″ wheels, Goodyear F1 tires – Equipped with nitrous but not functional – Custom body kit with new fender flares, side skirts with exhaust outlets, trunk lid and hood – Part of a private collection since filming [gallery] [Source] via [Mecum]]]>