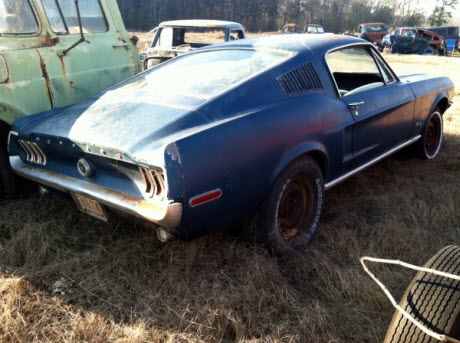 <![CDATA[It's not every day you come across a genuine Shelby GT350 barn find. In this instance there isn't exactly a barn. Instead this special 1966 Shelby GT350 has been found sitting out in the open. And before you ask. It is not for sale. The story goes a nice chap by the name of Scott managed to stumble across a whole heap of rotting Mustangs at an old lawnmower repair shop as he explains to <a href="http://www.barnfinds.com/storage-container-shelby/">Barnfinds

A few years ago I went to a local lawnmower repair shop to order some parts, the man behind the counter said he might have my exact model out behind the barn and I could get the parts used if I wanted! I said “sure lets take a look” as we get to the barn I see a Mustang fastback and start asking about it and then he shows me more barns on the property with several other classic cars and motors and parts etc.. there where storage containers and other buildings all stuffed with Mustangs and parts. the place was amazing but as you can guess… “no not for sale”.

More recently Scott went back to see if the cars were for sale and stumbled across the GT350 sititng amongst other fastbacks.

The owner says this is a 1966 GT350 “carry over”. After some research, I found out that the first 252 GT350s of 1966 where actually built from 1965 mustangs. See carryovergt350.com. He says, this is one of them. Story is a guy in the army bought it new in LA California, raced it, and then got papers to transfer to Hunter Army Base in Savannah, GA. The car has been raced, dragged, and was even a gasser at one time (yes solid axle front end too) then the current owner bought it in 1982 for $2,000. He bought it in the same condition it’s in today and still wants to restore it someday, so not for sale. Recently he lost it’s storage and here it sits outside.

Check out the full story over at BarnFinds [gallery] ]]>