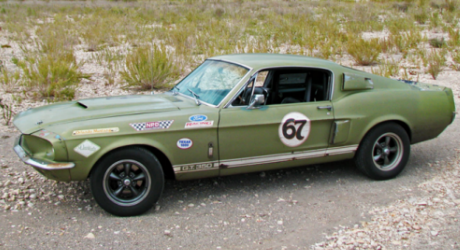 barn find story we’ve ever come across. A genuine 1967 Shelby GT350 that, instead of being restored from the ground up, has not been touched cosmetically. However all the insides, running gear and everything you cannot see have been replaced with new parts to ensure she runs and drives perfectly. The result? A beautiful period car, that is brand new underneath. A car that can lay claim to the old Ricky-racers of times past.
The project can best be described by the guys at Classic Motorsport.

The continuous needling—along with a few beers—led us to form a half-assed plan: How about we leave the outside just the way it is? Some may call it rust and grime, others may call it patina, but we’ll completely fix all the mechanics underneath it and make the car safe and fun to drive.
Everyone at the office loved that idea, and after a few more beers we somehow decided we’d try to get the necessary work done in six weeks. Then, we’d take the newly resurrected Shelby—instead of our Tiger project car—on this year’s Going To The Sun Rally in Montana.
What could possibly go wrong? It’s just a complete chassis restoration on a nearly 50-year-old car that we’ve only owned for a week and driven a total of 8 miles.

Dubbed the ‘Terlingua Terror’ as a tribute to Jerry Titus’s Trans-Am winning Shelby notchback as well as a nod to the fact that the Texas 1000 rally route often includes the Terlingua area of Texas, the car had every mechanical part under the hood and on the chassis restored or replaced with an new one from NPD. The car wasn’t originally fitted with a limited-slip differential so the guys added one in as well as removing the non-original 289 engine and replacing it with a Ford Racing 500 horsepower, 363 cubic-inch engine.
Vintage vinyl graphics were added to the car to increase that ‘used’ look which in our opinion makes the car. The concept of having an ‘original’ untouched car cosmetically has never even occurred to us here. But it has now genuinely thrown a spanner in the works. Anyone have a cheap barn find we can buy?
Mustang Monthly have a great in-depth write up about it by the owner of the car, Tim Suddard. And also check out Classic Motorsports project page which details every step of the project from start to finish. We’ve literally been reading these four hours!