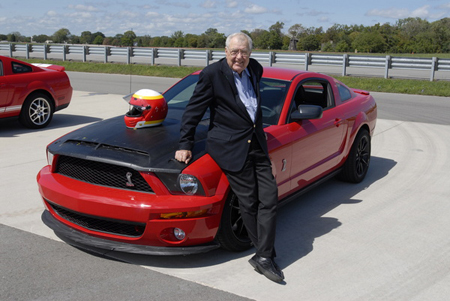 Yesterday, as some of you may know, was Carroll Shelby’s 85th Birthday (well yesterday for me, but still today for the United States). A day worth noting because Ford and Shelby used the it to announce the production of the GT500KR. Just like its namesake, the 1968 GT500KR, the 2008 “King of the Road” packs a walloping dose of Ford performance. The Ford SVT-engineered 5.4-liter supercharged V-8 is enhanced with a Ford Racing Power Upgrade Pack that boosts horsepower to an estimated 540-hp and torque to 510 ft.-lbs. It’s worthing noting that Ford are only producing 1000 of these, so you can expect the price to be a hefty one. Now I have previously stated that to me Carrol Shelby is just another guy, because Growing up in Australia not to many people know who the guy is unless you area die hard Ford fan. But through the months I have come to appreciate his work over the time and although I don’t like every car he has had his hand in making I do recognize his contribution to the American Muscle car. So a big 67mustangblog Happy Birthday to Carroll.