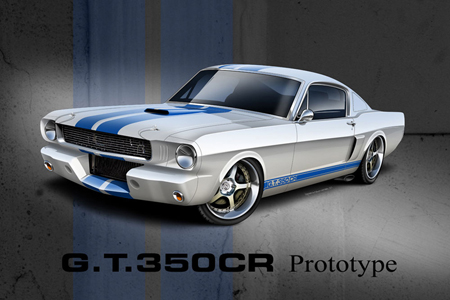 <![CDATA[There's lots of chatter this week around <strong>Classic Recreations and the fact that they may be introducing a Shelby G.T.350CR to the market to sit along side their popular G.T.500CR models. This would make sense given the success of their current models so after a bit of digging I can quite confidently confirm that Classic Recreations will be introducing a G.T350 model. Details are sketchy and I have no idea when the new model will be introduced but I can tell you I believe it will feature a 545 HP 427 cubic inch stroker motor, authentic Shelby Performance Parts, rack and pinion steering, race inspired coil over suspension and oversized disc brakes. The cars will apparently be based on a 1965 and 1966 model mustang as expected and will start around the $120,000 mark with upgrades available. I had a rendering sent to me earlier this week but CR will neither confirm or deny it’s coming, though given the rendering is designed almost identically like their G.T.500 renderings I think it’s safe to say this is a given. Stay tuned for full specs if and when they come from Classic Recreations.]]>

One thought on “Classic Recreations Bringing a Shelby G.T.350CR To The Market?”