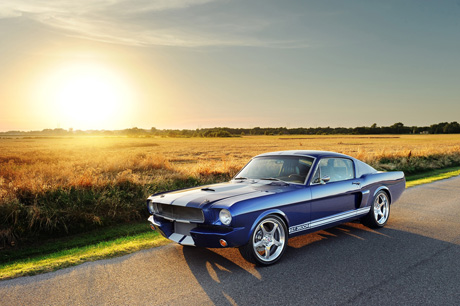 The 1966 Shelby G.T.350 is one of the most beloved sports cars ever built and I’m thrilled to contribute to the Shelby legacy.

This first-of-its kind Shelby (serial number SCR350-00P) was built with input and oversight from Shelby Licensing, starting life as an original 1966 Mustang fastback before undergoing a complete ground-up rebuild. Features include a 545hp fuel injected 427 cubic inch (7.0L) small block Ford Racing crate motor, coil-over suspension, power rack and pinion steering and a Tremec five speed manual transmission to add to the modern driving experience. Other features include Carroll Shelby signature rally series 1000 seats, climate control, a top-shelf sound system, a dual-tank Nitrous injection system, bespoke forged three-piece HRE Performance wheels, Wilwood brakes and custom paint. The G.T.350CR prototype comes with an official Shelby serial number and will be included in the official Shelby American World Registry. Full specs are included below. “The 1966 Shelby G.T.350 is one of the most beloved sports cars ever built and I’m thrilled to contribute to the Shelby legacy”. said Jason Engel, Owner of Classic Recreations. “There is no question that the ’66 holds a special place in the hearts of racing and Shelby fans, but the original cars are now difficult to drive due to their value and antiquated underpinnings. We were able to pair the original design with modern technology for the ultimate driving experience – and this is the very first car in the line.” After the prototype is auctioned, Classic Recreations will begin taking orders for Shelby G.T.350CRs with a limit of ten each year. More information can be found on www.ClassicRecreations.com and www.Mecum.com. [gallery ids="7224,7225,7226"]]]>