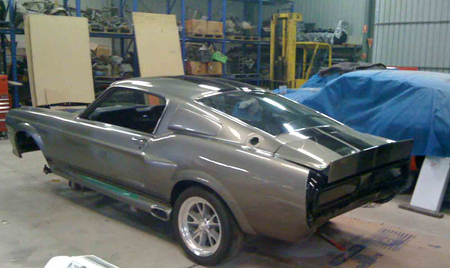 <![CDATA[Last time I posted about Damian's Eleanor he was <a href="http://67mustangblog.com/2010/01/damian%E2%80%99s-new-year-%E2%80%9Ckimberly%E2%80%9D-update-so-close/">very close to having her finished, in fact they were looking at an April 2010 completion date. Well unfortunately that month came and went though as Damian explains it’s ever so close now with the final rebuild taking place “I was hoping to have the car in my hands, however it’s not. It is now having a lot of the great stuff finally put in stereo, motor, gear box, interior etc. I am pushing the guys to get it done and up to Sydney before December this year.” Best of all the motor was put on the dyno and the numbers speak for themselves. HP: 510hp at the flywheel Torque: 4500 foot pounds @ 3000rpm Super charger Boost: 4 pound only NOS: 0 Not bad at all with only 4 pound of boost. Excitedly Damian says they are thinking of running 7-8 pound of boost with NOS. Just think of what it could do then. We’re staying all over this build and will bring updates as Damian sends them.]]>