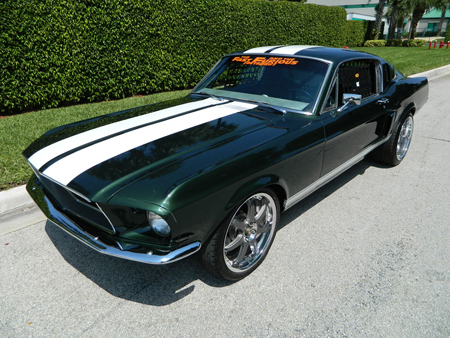 We’ve all seen the great looking green Fastback Mustang that stared in the Tokyo Drift version of the Fast & The Furious franchise. If you haven’t then the car was a beautiful yet controversial Mustang powered by a Nissan RB26DETT engine. Well now one of the official stunt cars has shown up on eBay and at a great price, so far. It’s commonly known that in movies where cars are featuring the one you see on screen is not the only one. They often have various versions. Some for stunts with special suspension, some for camera shots like close ups or interior shots and many more. For instance in the 2000 version of Gone In 60 Seconds there were 12 versions of Eleanor. Here we have a nice example of the 1967 Mustang that featured in The Fast & The Furious movie. This one is powered by a V8 with toploader and not the RB26DETT as the movie car had. It appears this car was a stunt car only and was built up with extra suspension. Currently the bidding is at just over $18k with only 2 days left. if it ended now that mght not be a bad deal. If you’re interested go here Hat tip to MusthaveMustangs I’ll leave you with an article Edmund’s Inside Line did on three of the remaining Mustangs from the movie. “In The Fast & the Furious: Tokyo Drift, the fiction is that the hero transplants the powertrain from a Nissan Skyline GT-R into an old Mustang in just one day so he can take on the Drift King that night and prove himself the greatest drifter of them all. In real life, five of the six Mustangs built by the Tokyo Drift production team had American V8s under their hood for reliable power production during filming. Nothing beats a big-inch American V8 when it comes to making power. Inside Line ultimately tested three of the surviving Ford Mustangs — the almost pristine car with the Nissan six and two equipped with 430-cubic-inch Ford Windsor V8s and four-speed “Toploader” manual transmissions. One of the V8 drift cars was clean and ready for show duty, while the other had been battered in every way, but ran strong. All of the Mustangs in The Fast and the Furious: Tokyo Drift had Global West suspension pieces and rack and pinion steering in common. And all three had 245/35R19 front and 275/35R19 rear Toyo Proxes T1R tires and Volk Racing Grey GT-7 wheels keeping them off the ground. However, the intercoolers and massive exhaust tips on the V8 Mustangs were just cosmetic; the exhaust actually exited through Magnaflow mufflers forward of the rear axle. While the Nissan-powered Mustang responded to a light touch, the muscle-era power plants and transmissions demanded some beating — a sledgehammer would have come in handy. And while the six-cylinder Mustang idled smoothly, the V8 drift cars seemed to be shaking themselves into a puddle of their constituent molecules. Dip into the throttle on either V8 machine, however, and the engine would roar like a startled lion. A six-cylinder turbo engine may match a V8 in measured performance, but it will never have the charisma of a V8. With at least 375 horsepower on tap, the V8 Tokyo Drift Mustangs could spin their tires with ease — and would, no matter what. The beaten and battered Mustang got to 60 mph in 6.7 seconds and consumed the quarter-mile in 14.7 seconds at 96.7 mph. For a drift car built to bash into other cars while wagging its tail violently, that’s not bad.” [gallery]]]>