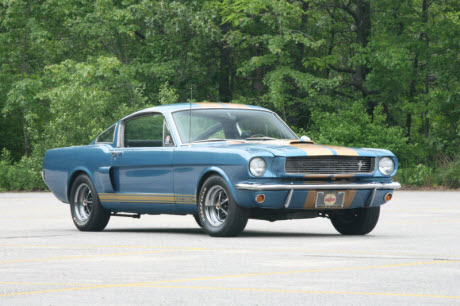 <![CDATA[Little known to all but the hardcore Mustang enthusiast is that the 1966 Shelby GT350 Hertz models came in not one colour but four. The Raven Black we all know and recognise, Wimbledon White, Candy Apple Red, Sapphire Blue and Ivy Green. Only a handful of these color combinations were produced and as such rarely come up for sale or are even seen though this week a nice Sapphire Blue example has appeared for sale on <a href="http://cgi.ebay.com/ebaymotors/Shelby-/221201482871?pt=US_Cars_Trucks&#038;hash=item3380a2c477#ht_500wt_1182">eBay. In all, only 1,001 of these fastbacks were built for Hertz in 1966. The make-up consisted of 999 units of the following colors: A majority in Raven Black with Gold (Bronze Powder) side and Le Mans racing stripes, 50 Candy Apple Red with side stripes, 50 Wimbledon White with side stripes (as well as several models with both side and Le Mans stripes), 50 Sapphire Blue models with side stripes, and 50 Ivy Green with side stripes. Not much else is mentioned about the car other than the seller has the original California plates that were on the Hertz rental car and also the Hertz service records for thecar. Head on over to eBay to check out the auction. [gallery]]]>