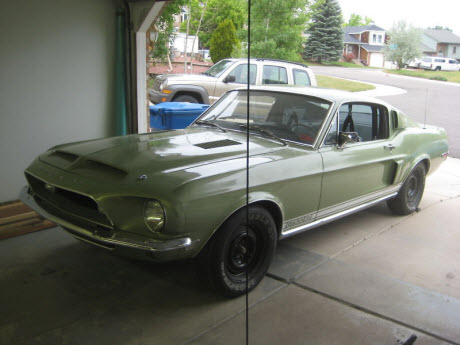 <![CDATA[It's always amazing to see a vintage Shelby up for auction and even better when it has only had one or two owners. This is one of those cases. Though before you start reaching for the checkbook be sure to check the fine print. This 1968 Shelby GT500KR unfortunately has had some damage in past that looks to have been fixed and sprayed over. Though what's more sigh worthy is that the original Ford Cobrajet 428 engine has been replaced and is "long gone" It's a shame really. We really want to love this car. The seller is asking for $90k and while we could see that could be fair for an original example with matching engine we just cannot see this one going for that kind of money. Prices for 1968 GT500KR's appear to have fallen off a cliff around 2009. In 2001 a 9000 mile unrestored survivor that was displayed at SEMA sold for $250k (with buyer’s premium). While a GT500KR in a similar condition to this example (Condition4) averages now at $84,500 according to <a href="http://www.hagerty.com/valuationtools/HVT/VehicleSearch">Hagerty Valuations.

1968 Shelby GT500 KR value change over time.[/caption]
While on the GT500KR subject take a moment to relive this vintage road test video from 1968. eBay Auction Description Up for auction, this Awesome, Vintage! 1968 Shelby GT 500 KR mustang has been in long term storage for a number of years. Purchased by the original owner Alfred Jones who was an airline pilot in Miami Florida in 1969. Now owned by the second owner who has had the car since 1983. This KR has had one repaint along with some slight front end damage that was repaired many years ago. The repaint is old and is in ok condition. There are some occasional ships and scratches but nothing catastrophic. The numbers matching motor is long gone and it is unknown at this time about the transmission. It is a complete running car but will need motor work as the compression is low in # 7&8 cylinders and they do not fire. The undercarriage is in original condition with factory undercoat. There is some slight surface rust and slight damage to the frame rails, floor pans and underside of this car, but nothing catastrophic. The front suspension/ brakes are of OEM equipment and old. More recently a new fuel tank and carburetor rebuild were done to get the car up and running. This is when we determined the missing cylinders and that the engine was not running properly and that the transmission was having trouble going int second geer. At the time that the car has been running all of the gauges, headlights, wipers and yes even the swing away steering wheel still works! This is a great Shelby platform to rebuild the body is super clean, no signs of heavy collision or body rust and comes with a lot of new parts. Plugs, wires, cap, rotor, air cleaner snorkel, oil filter, belts/ hoses, brake booster, battery cables/ bat tray/ tie down, weather striping, kick panels, visor chrome, tail light covers, jack/ handle, heater core, rocker chrome, rear valance, lower control arms, fan shroud and so much more, just ask me. I have the Marti report/ documentation and more pictures upon request. There is no guarantee or warranty on this vintage Shelby so please call and ask as many questions as you like. Best regards, Rich 303-931-5412. I deal with a shipping broker and can get you a wholesale price! [eBay] [gallery ids="7193,7194,7195,7196,7197,7198,7199,7200"]]]>