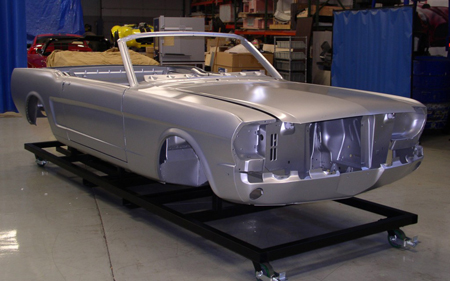 A few days ago we posted about the possibility of a brand new officially licensed Ford body shell. specifically 1964-1966 models. Well the rumors were true and we have the photos to prove it. The new bodies are produced by Dynacorn International who already produce a range of bodies for Ford including 1967 and 1968 Fastbacks. The announcement is a great win for the restoration industry as it’s increasingly difficult to find an original donor car to begin a project with. “The 1964-1966 Mustang is the most restored vintage vehicle, but the number of original bodies is shrinking every year,” says Dennis Mondrach, licensing manager at Ford Restoration parts. “Most of the original Mustangs left in scrapyards are rusted or wrecked beyond repair. This new shell is made of virgin metal. It comes rustproofed, and after final adjustment and finish preparation, it is ready for painting and final assembly.” The quality of the new bodies is something that was not overlooked in the production process either. “We use a modern universal automotive-grade steel that is actually stronger than the original, and modern welding techniques along with more welds to strengthen the body,” said Jim Christina, vice president of Dynacorn International” For those with the money It’s worth noting that with these new bodies, which cost about $15,000 USD, you can now basically build a 1964-1965 Mustang in every single detail, as it was wan it ran off the production line. Go on then. Get building! [gallery] ]]>