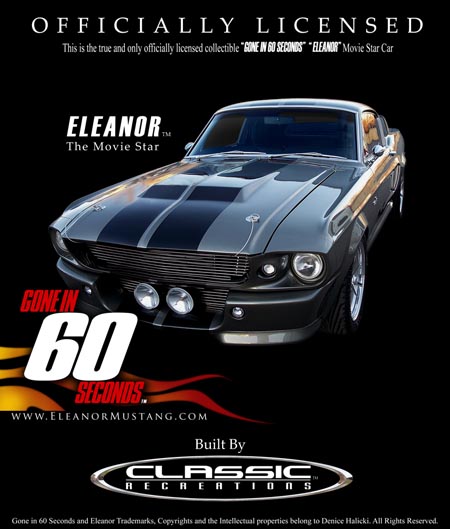 That’s right, you heard it here first! Halicki Films Company, producer of the motion picture “Gone in 60 Seconds,” have announced that Classic Recreations have been selected as the exclusive, first ever, officially-licensed custom fabricator to build the iconic “Eleanor” Mustang from “Gone in 60 Seconds.” “Eleanor” captured everyone’s hearts in her reprisal role in the 2000 feature film “Gone in 60 Seconds,” You may be thinking, “Weren’t Unique Performance the first ever officially licensed Eleanor builders?” and the answer is yes and no. Carroll Shelby signed an agreement with UP over the Shelby GT500 name but you all may remember Denice Halicki, the daughter of Toby Halicki filed a lawsuit against Shelby claiming claiming Carroll Shelby, Carroll Shelby International , Carroll Shelby Licensing, Carroll Shelby Engineering Inc, Carroll Shelby Motors Inc, Carroll Shelby Distribution Int. Inc, Carroll Hall Shelby Trust, Unique Motorcars Inc., Unique Performance Inc. and Sanderson Sales & Marketing, since the remake of the original film, there was a “blatant theft of Eleanor” by manufacturing, marketing and selling of unauthorised “knock offs” of “Eleanor” featured in the remake. The outcome of this suit was that Halicki won the rights to ‘Eleanor’ and Shelby kept his rights to use of “GT500” and “Shelby” which is what Unique Performance bought the rights to use. It is now evident that the Halicki family was intent to make use of the ‘Eleanor’ name and this is what they have now done. The press release states “Halicki Films Company granted Classic Recreations the license to build the only genuine “Eleanors” after numerous visits to the company’s Oklahoma factory and a full battery of rigorous background and criteria checks. The agreement grants Classic Recreations the right to license the intellectual properties held exclusively by Halicki Films Company, including the copyrights, trademarks, trade dress and logos in and to “Eleanor” and “Gone in 60 Seconds,” and “Eleanor’s” one-of-a-kind, amazing movie looks, in connection with the manufacturing, marketing, sale and distribution of the officially licensed collectible “Gone in 60 Seconds Eleanor.” Both Classic Recreations and Halicki Films company look to have gone to extra lengths to protect them selves from such events that occurred to Unique Performance and I’m sure customers weary of the whole thing after the fallout from the Unique Performance dramas will go into this one a bit cautious. But they look to have covered all their bases “To ensure the safety of each transaction, Classic Recreation will maintain each customer’s initial deposit and purchase fee in an escrow account at a federally-insured financial institution until such time as the customer’s car is completed and ready for delivery.” The press release said. Using brand new Dynacorn Fastback bodies, Classic Recreations will custom build the cars in two models; a 535-horsepower FI Performance Model R, promising estimated top speeds of 172 mph and 4.90-second 0-60-mph quarter-mile times priced at $139,900, and a 770-horsepower FIS Performance Model S ($189,900) with a modified rear suspension. Other modern product fitted to the cars include; coil over suspension, sequential fuel injection, oversized slotted and crossdrilled Baer brakes, and a 410cid Keith Craft Racing engine, Tremec TKO Manual or Automatic Transmission, Posi Traction, Concept One serpentine drive belt system, braided stainless fuel lines, air conditioning, custom sound system, and five-point Simpson harnesses. Additional owner-specified upgrades can include leather interior, keyless entry, and custom in-dash DVD and satellite navigation and entertainment systems. “We wanted to make sure the company we chose to build the very first authentic, officially licensed ‘Eleanor’ was credible and reliable, and, more importantly, that they are truly craftsmen. Classic Recreations’ passion for the Movies and ‘Eleanor’ can be seen in the company’s handcrafting work. They’re making show cars,” said Ms Denice Halicki. Read the full Press release here