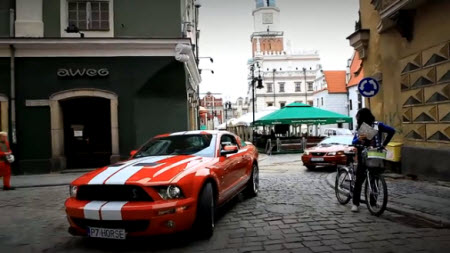 We don’t often get to see well produced video’s of Mustangs so it’s always a treat when something like this pops up. To promote the upcoming Mustang Race 2011 the Polish Mustang club has produced this amazing video. Check it out after the jump. Speaking to MustnagEvolution the promoters had this to say about the race: “The idea behind the Mustang Race 2011 is to present the American automotive legend, to share our idea for life and to have fun with the participants and friends of the Club. The organiser of the rally is Rafał “Alustar” Wrochna, who is an active member of the Mustang Club of Poland, big fan of Mustangs and 1/4 mile racing. During the Mustang Race 2011 we plan to cover a distance of approximately 700km, which was divided into four parts, one for each day of the rally. Our choice fell on the cities associated with the Club and Club members: Sandomierz (start), Belchatow, Wloclawek, Chojnice, Kolobrzeg (finishing-line). We’re expecting thirty crews at the starting line. Each team will receive a unique starting number. The conditions of participation are simple: own a Ford Mustang, have some sense of humor and willingness to have fun. All Mustangs, regardless of the generation, model and BHP are welcome. We expect 1965 Mustang to compete against 2007 Shelby GT500. Mustang Race 2011 is not about speed or horsepower. It’s about cunning, courage and spontaneity. In order to win, a crew must gain the highest score in competitions and tests presented at all the stages of the race.” Mustang race will take place between 30th of June and 3rd of July 2011. Let’s just hope this video is only a taste of whats to come. Check out http://www.mustangrace.pl for all the info (Polish) Click to watch in HD!