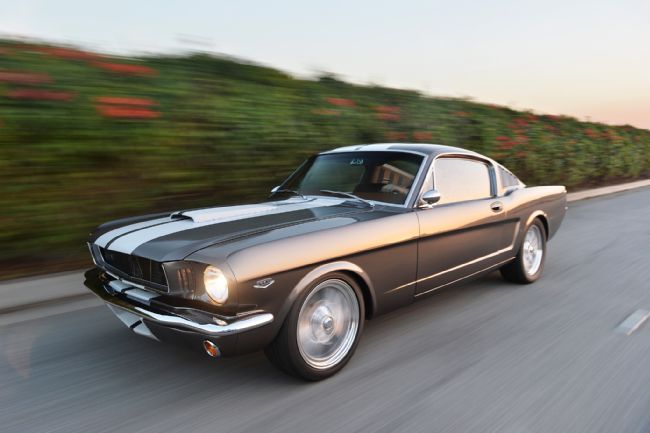 <![CDATA[Arguably one of the best aspects of Mustangs through the years is the fact that they are infinitely customizable. It’s easy to find mods and custom parts for even the older Mustang Models — and what you can’t find, it’s easy to fabricate. That is just what Glen Martyn did with this truly unique 1966 Mustang Fastback model that he’s owned for more than two decades. <span id="more-7980"> Humble Beginnings It took quite a bit of begging and pleading before Martyn got his hands on this 1966 beauty. Initially, it actually belonged to a friend’s wife, who was gifted it by her father. She gave up on it after the transmission died. After plenty of wheedling and bugging, they finally sold him the car, and the beginning of a legend was born. From the Ground Up Through the transmission problems were definitely a big issue, there weren’t a whole lot of other problems with the car when Martyn finally got his hands on it. When it came down to the body, the only thing that had to replace was one of the rear quarter panels. Martyn didn’t really get to work on the restoration and customization of this classic beauty until nearly two decades after he purchased it — things like his sons’ college funds taking precedence. Once he got a chance to really get in under that hood, though, the rest is history. The first major purchase he made was the heart of the car — a 351 Cleveland out of a 1972 DeTomaso Pantera that the original owner planned to put into a ’71 Ranchero. It’s still equipped with the original Pantera heads, though they’ve been treated and polished in the interim, as well as refits with stainless steel 2.02/1.60-inch intake and exhaust valves. A Holley 850 carburetor and Weiand aluminum intake handle the air and fuel, and MSD takes care of all the electronic parts, including the ignition box and distributor. One of the most unique parts of this engine set-up is the oil pan — the pan itself is a custom job that holds 3.5 quarts and is paired with an external oil pump. To supplement the oil supply, there is an oil accumulator mounted in the trunk which provides an additional 2.5 quarts of oil as necessary. Sink Into Those Seats The custom interior is to die for as well — Deluxe Interiors upholstered the power seats out of a Pontiac LeMans and door panels in fantastic Autolux leather in ‘Bourbon.’ All the important information is available on the custom dash — speed, tach, etc. — but don’t look there for the radio. Part of the customization included removing the radio and replacing it with air ducts, as well as relocating the stereo itself to the glove box. With all the custom work done on this car so far, are there any plans to add any new upgrades? Glen says no. “I love the car exactly as it is,” he explained. With the gentle roar of that Pantera engine under the hood and the luxury of those leather upholstered seats, we can’t blame him there! This 1966 custom Mustang is a dream, and after all the hard work Martyn and his crews did to get it looking this amazing, they definitely deserve some time to enjoy that custom beauty! [gallery ids="7982,7983,7984,7985,7986"] ]]>