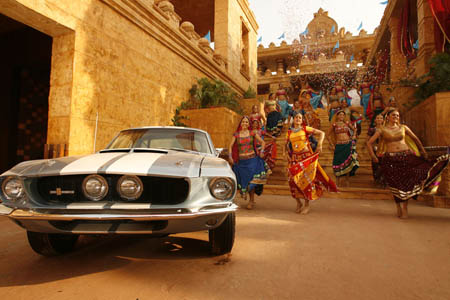 For any Mustang enthusiast driving 2,000 kilometres across India in vintage Mustangs and rare Shelbys would be the ultimate adventure, the ultimate roadtrip. It’s a trip I could not even conceive putting my beloved car through and yet a team of enthusists have done it. An epic journey from Mumbai to Jodhpur often over very rough terrain with ten amazing Mustangs including a Bullitt GT390, Shelby GT500 and Shelby GT500 KR. Now a documentry is being finalised and we have the trailer for it after the jump. The twelve cars belong to multi-millionaire businesman Bassam Abdallah. “I fell in love with the mustang when I watched the movie Bullitt because I am a big fan of Steve Mcqueen. I have ten fantastic mustangs in paris, in my garage and suddenly I decided to take them to India to bring them to life again. People told me that I would never make it.” But make it he did and after a few car troubles after arriving the team was on it’s way on the 14-day roadtrip of a lifetime. “I felt that it is very poor to leave them in the garage like that, like the life of the mustang had stopped. My love for these iconic cars pushed me to do it without thinking. Generally people restore this kind of car and keep it in the garage, drive it on the weekened when the weather is good. The fact that I took my own collection to India for many off these collectors can not think that it is possible.” The road trip was a collaborative effort with Equus Mustang and Classic Design Concepts. “Working with Tjaarda and his team at EQUUS gives us an opportunity to make a significant footprint in the international automotive market,” said David Hakim, director of sales & marketing for CDC. “While we’ve developed a strong international customer base in recent years, our work on the EQUUS Mustang and involvement in the rally will move our sales program into the fast lane.” The whole purpose of the road trip was to promote the Mustangs that CDC and Equus have come up with and plan to produce primarily for the Indian market. The interesting part however is the documentry that should be close to finished given that the trainler (below) has been released. This is something I will be watching liek a hawk. For the moment spend some time looking over the vast amounts of material that there is from the trip, including Ford designer Michael Chetcuti’s youtube video entries and the photos and videos over at the official site

And for a second trailer with some different footage go here [gallery] Photos courtesy of www.maharajah-of-the-road.com]]>

5 thoughts on “Maharajah Of The Road – Mustang Roadtrip Through India”