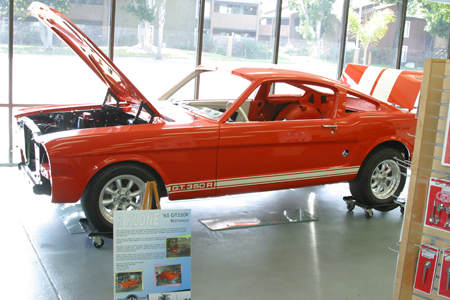 Mustangs & Fast Fords O.C. have a novel project going on right now. They’re building a 1966 Mustang GT350 restomod in their showroom on Main street in Santa Ana The guys over at Mustang Monthly were invited to check out the very public build of a 1966 red GT350 replica. The car is being put together in the open for customers and passers by to look at. Also spread out is every part imaginable that goes into the build of such project. “Because Paul is a dyed in the wool Mustang enthusiast who owns a concours restored ’64 1/2 hardtop in Vintage Burgundy, it’s easy for him to rub elbows with just about anyone who walks in. Paul wanted to create not only a parts and service spot for Mustang owners, but a place he calls a destination for people who are passionate about Mustangs. It is more than just a destination – it is an experience for anyone who loves classic Mustangs and vintage Fords.” If you’re in the area and want to go check it out their address is 3001 S. Main Street, Santa Ana, CA 92707. Apparently their is a website in development for people like myself who can’t have a look in person. Thanks to [Mustang Monthly] Photo Credit – [Mustang Monthly] [gallery] ]]>