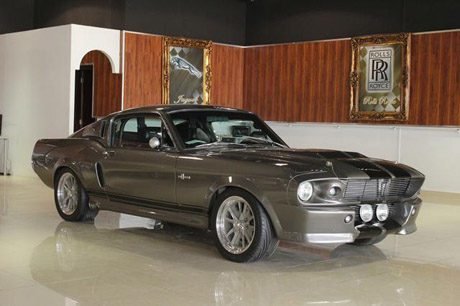 <![CDATA[Seldom do we see one of the original Eleanor movie cars <strong>show up for sale. And for good reason, there are only eleven out there, six of which were apparently written off during filming. Each one uniquely different depending on the role it played in the movie. Some were beefed up with suspension for stunts while others were used for close ups and chase shots. This is one of those cars and you can own it! The car is said to be quite unique and even features ‘Gone in 60 Seconds’ engraved on the engine, along with signatures of the movie’s stars. The seller, Faisal Ballaith of Dubai, claims the engine has been replaced and now sports a Ford 428, which generates 650 horsepower. “This car is something that nobody else has…it’s a collector’s car,” says Ballaith. It is also said to have received interest from the royal family though the car still remains unsold. The seller is asking Dhs470,000 which is roughly $USD 127,000. Not too shabby. If you’re keen on a trip to Dubai check out the listing HERE. [gallery] ]]>

One thought on “Original Eleanor movie car on sale in Dubai”