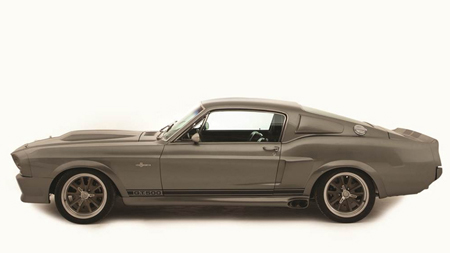 It’s not very often an original Gone In 60 Seconds movie car comes up for auction. Mainly because of the twelve cars produced for the movie five were destroyed leaving only seven left in various collections and museums. This is car number seven. One of only three used as a ‘hero’ car used and driven by the actors and it’s to go under the hammer this weekend at the Autosport International show in Birmingham, UK. The build sheet which accompanies the car shows this car (chassis number 7R02C173895) was not just built to look fast, it was built to GO fast. It’s fitted with a 351 cubic inch Ford Racing crate motor fitted with a ‘big’ camshaft and 700cfm Holley 4-barrel carburetor. Total Control Products lowered the suspension with coil over front suspension and Willwood disk brakes all round with 6 piston callipers on the front. After the movie, the side exhausts were made functional by Cinema Vehicle Services and the tank is filled through a Mach 1 cap on the C-pillar. “This is one of only two original cars in private hands. We are offering the opportunity to acquire one of the cars that actually appeared in the movie and which will undoubtedly increase in value in years to come,” said Coys’ managing director, Chris Routledge. So what’s it worth? Well according to Coys, the auction house that consigned it, it’ll at least £100,000 or almost $155,000 USD. So if that doesn’t sway you head on over to their site. [UPDATE] Just a quick update to let you know the car was sold at the auction for for £85,000, £95,000 with premium. A tad under what was expected but still a tidy sum.