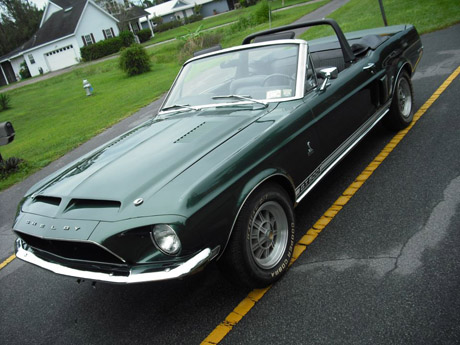 <![CDATA[It's always interesting when we find stories about vintage Mustangs and celebrities and it's even better when that Mustang is a Shelby. How can we forget <a href="http://67mustangblog.com/2010/11/jim-morrisons-1967-ford-mustang-gt-500-where-is-it-now/">Jim Morrison’s 1967 GT500? This time around comes an interesting story of Sean Penn’s former 1968 Shelby GT500 that was given to him by Madonna as a wedding gift in 1985. The car was even used on the day in the bridal party. What makes this car even more interesting is it is one of the ‘Brat Pack‘ vehicles that Penn, Emilio Estevez, Kiefer Sutherland and others would drive around Beverly Hills and get themselves into trouble with. Back when the current owner, Mark Goodal, happened upon the car he stated:

Mega find day for me, this is the actual Shelby bought by Madonna for Sean Penn for there 1985 Wedding, it was actaully used in the Wedding Parade aswell, apart from that its stunning with just 59,969 miles, 4 speed tranny (one of 153 made).