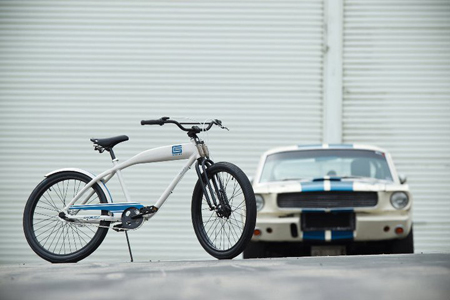 When you think of Shelby you don’t usually think of a bicycle. So I was a little surprised when I read this week that Shelby and Felt bikes were collaborating to produce a limited edition cruiser bicycle and after seeing it all I can say is I want one! The individually badged and serial numbered bikes are finished in Wimbledon White with the Guardsman Blue paint scheme that’s so reminiscent of the vintage Shelby cars. The bike boasts Felt’s hydro-formed aluminum tank frame, three-speed Shimano Nexus internal gearing and 36-spoke wheels. “Felt Bicycles is a world renowned competition and high performance bicycle manufacturer and designer,” noted Tracey Smith, vice president of Carroll Shelby Licensing. “The team at Felt understands the passion that drives many Shelby enthusiasts, which is similar to the spirit of competition in many Felt bike owners. Now enthusiasts can take their love of Shelbys to the bike trails, streets and beach boardwalks.” “The bike rolls on 36 spoke wheels wrapped with “blue dot” tires to resemble automotive racing tires, and a proprietary linkage-designed springer fork affords fast and precise handling. Every detail on the bike is honed to the tradition and passion embodied by Carroll Shelby and his company.” It does sound like a bit of an odd thing for Shelby to do. Regardless, I still would love to own one. If you want one too it can be yours for $999. [gallery] ]]>