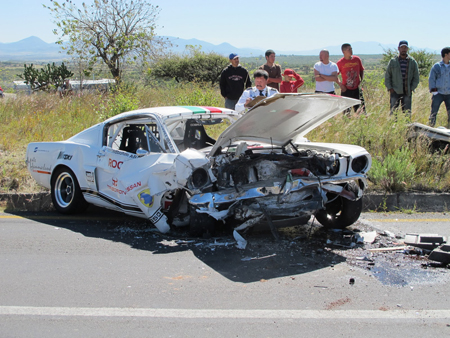 There are some fantastic road rallies and endurance races around the world that vintage cars are a part of. The Mille Miglia and Targa Tasmania are two that come to mind. But there is also the Carrera Panamericana. It’s a road rally that runs from one end of Mexico to the other which originally ran for four years, 1950-1954, but has seen a ressurection in recent years. Though this years event has seen a quite severe crash involving a once nice looking vintage Mustang. The car was custom built for the rally by Mats Hammerland whos company build and race cars mainly for the Carrera Panamericana. Details are scarce but apparently the car was driven by to Swedish participants who were on the wrong side of the road plowing head on into a local’s car. It all happened on stage 4 and it’s hard to tell from the video [German] what actually happened or if anyone was injured but from the look of it I’d find it hard to believe everyone was able to come away unscathed. Though another racer who is also participating in the rally said this. “We did come upon the scene maybe an hour later and saw the carnage and I do not believe the reports that all 5 people involved are okay. The front end of both cars, on the passenger side, was pushed to the windshield. What a mess.” We hope everyone is ok.