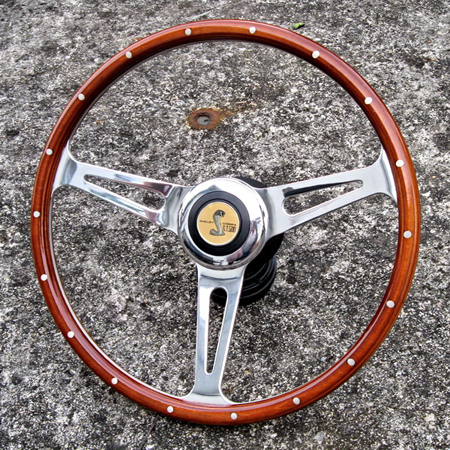 So since my post about the movie correct French steering wheel availability it seems Eleanor enthusiasts have bombarded my friend Dom proving there are many of you out there that are after one of these hard to find steering wheels. Well for those still deciding or considering one here is a small update from Dom, hit the jump for pictures of this beautiful wheel. In my last post on the subject I posted about Dom and the Woodwheel website. Dom has now given me his personal website (in French) and has also sent over a heap of pictures. But first, who is Dom you ask? Well in his own words “I’m a French enthusiast and collector of classic steering wheels. As a hobby, I design steering wheels as I feel they should look regarding the period of the car they may fit.” As I said since my last post Dom has been inundated with requests for the wheel and after stating “I may make the original wheel available again for a few number of you since the workshop where my hobby wheels are currently handcrafted is a “survivor” of Motolita France who made these Eleanor wheels up to about 2002” He has decided to produce them in small runs. hen it comes down to the finish, personally I was only ensuring it was smooth and had the 18 rivets but Dom is determine to produce the movie correct wheel which you can see below is a much lighter color. Here is one an original used on the movie cars: 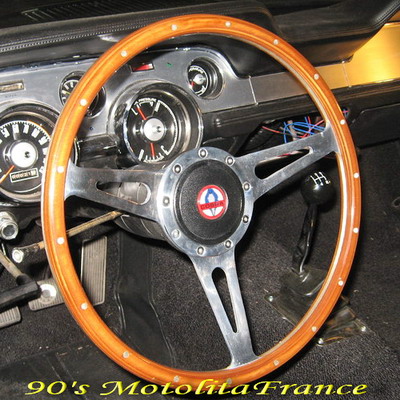 And here is one Dom has produced: 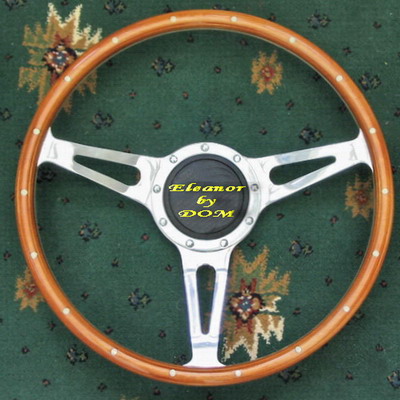 Great isn’t it. But it doesn’t stop there. If you supply the center horn graphic he can attach this to any hub you like. See pictures below. The steel hubs give the car that authentic GT500 look if you’re not keen on the black plastic like the movie car had. As always though to discuss the wheels, sizes, finishes and anything else please contact Dom direct. He can be contacted at reffet.dom[at]free.fr. Tell him Cam sent you! Oh and here is a nice piece of inside info on the whole Motolita/Lecarra French debacle. “Motolita France was younger than Motolita UK but quickly they had a bigger growth due to some OE business in vehicles manufacturers and European aftermarket business (more or less in competition with Motolita UK). More, since Moto-Lita brand was first registered by Motolita UK, Motolita France was not free for its use and in view of developing their business, they created the Lecarra brand name . The boss was an ex-GI who married a french woman after WWII and stayed in France. The rest of his family was still in the States and so, that helped the development of Lecarra in the US at such a point that US part consisted of about 70-80% of their total business. The situation that put them in trouble was the Gulf War and the subsequent boycott of the French products occurred. That was the beginning of the agony that lasted over 10 years up to the final closure near 2002.” Here are some photos of a few variations Dom can produce. [gallery] ]]>