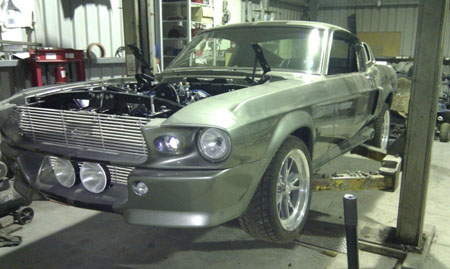 It’s been quite some time since I posted an update on Toby’s Eleanor project. The car has been ever so close to completion for quite a while. This week John over at the shop gave us an update. He’s been working ever so hard all whilst volunteering for the cleanup from the recent Australian floods. Currently interstate participating in the cleanup of the Queensland floods John has taken the time to give us a fresh update. “I had the engine in before Christmas but the T5 gearbox conversion caused more problems, this is not a straight forward conversion. I had to order a new X-member from RRS as well as different support member and mount to fit the T5 in the car – from the USA. But there are still issues with the clutch and fitment of the gearbox with the RRS gear installed and I haven’t been able to get any answers as everybody is still on Holiday. The engineer and other guys will be back on deck tomorrow so I will have some answers this week. In theory it all should work but because we are using a hydraulic clutch and its a 351 Windsor with the big flywheel and clutch plus trying to mate up a T5, there is nothing that you can just buy off the shelf!! But it’s not far off from being sorted out now, I am pretty sure I know what is wrong but I have to run it by the experts first, then have the modifications done.” “The Flywheel is a 164 tooth large diameter job and the clutch is an 11inch monster which was not standard equipment on the 351 Windsor. This has caused some of the dramas but it will be sorted one way or another. As standard the flywheel is smaller and the Clutch is 10-1/2inches. This flywheel – clutch kit would have come from a Clevo engine as all the engine guys I have spoken to reckon the 351 Windsor was never equipped with the 11inch clutch. Being that the flywheel is larger, the bell housing has to be larger and it’s causing a lot of problems with fitting things in around it and the RRS gear. When I spoke to the guys about it, they have only ever fitted the T5 with and standard flywheel/bell housing and an adaptor plate. So we are breaking new ground here as no one can tell me if this has ever been done before.” From the pictures below you can see the car is looking fantastic! I’m sure we’ll have a finished product in only a few months! But how about my car? I have a feeling it’s been years, literally, since i had any progress. That is about right. And to be honest it has been working out well for me, I’ve since purchased property and moved overseas (temporarily) but I foresee things to be moving along once Toby’s car is out of the shop. John goes on to explain. “When I get back I will be giving the conversion guys a visit so we can discuss what we need to do and how it will be done, there was a few minor problems with Toby’s regarding the clutch setup but that is all sorted now. What we will need to nail down is what you want to do with the dash, as in, do we go for a complete RRS dash, with plastics, etc, etc. We will have to think about it long and hard.” Though I think the best news for us is John’s last comments regarding Toby’s car. “When I get the beast off the hoist, I will give her a clean and polish and get some better photos but these should give you an idea. Can’t wait! [gallery] ]]>

11 thoughts on “[UPDATE] Toby's Eleanor Project – Ever So Close”