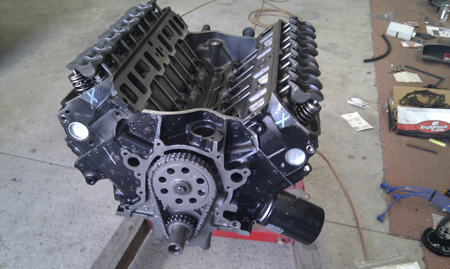 I know I’m always saying how close Toby’s car is from completion. I’ve probably been repeating myself for months and months. But as we all know with restorations like this anything can happen. A few weeks back I posted on Toby’s overheating issues, the last hurdle before delivery. Turns out the problem was not a simple one. It involved buying a whole new engine! On its final few test drives John found the car was running hot and overheating. After pulling things apart it was finally discovered that piston number 5 had blown. Which was caused by the owner previous to Toby not looking after it. The result? Get rid of the troubled engine and bring in a replacement 351. Now don’t take everything I say as gospel here. I’m no mechanic so as far as engines go I’m unsure if these things are fixable or if the done thing is to bring in a new motor. Take a look at the photos below and see for yourself. So where does that leave us? Well we’re on our way to having Toby’s car completed. And here is what this means for my car, as John puts it. “Once Toby’s is out of here I have yours and a few other projects to get into. We will need to have a think about how you want to go with the conversion, if you want to use any RRS stuff etc .But we can talk about that later as things look better for Toby’s.” And finally some parting words from John on Toby’s build. “Toby’s has been one of the hardest builds I have done due to all the rework I had to do, Anyway it’s almost done now.” More to come. [gallery]]]>