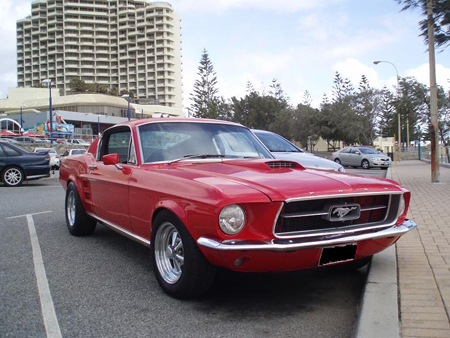 A new one to the readers rides on 67mustangblog. Andrew contacted me last week to tell me about his sweet ride. This beautiful red 1967 Fastback he’s named ‘Hayley’ “I’ve been a big fan of Eleanor since I saw the Nic Cage film, and had always dreamed of owning my own beast.” Andrew Says. “I finally picked up a ’67 Fastback a few months ago, with the intention of building an Eleanor”. The car was named Hayley after the red-haired singer from the alternative rock band Paramore and is a right hand drive car with a 02, 4 speed top-loader and Motec fuel-injection. Such is the dedication to this build Andrew has rented his house out and moved back to his folks place. Why? Well his father has a workshop, no better place to live than at the workshop! Work begins in a few weeks but there is a problem! “I now have this dilemma” he says. “I’ve kind of grown fond of the classic Muscle Car look of it!! So I’m stuck between an Eleanor and the classic look.” After pressing some more Andrew admits “As much as I love the Eleanor mustangs, I think I’m going to keep her stock. I have a poster of Eleanor in my lounge room, so I’ll just look at her each night, satisfied with knowing I could’ve had her if I wanted to” I’ll keep you updated on this one as Andrew has promised to send me regular picture updates! Hat tip to Andrew. [gallery]]]>