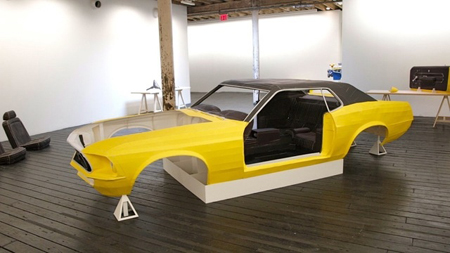 Artist Jonathan Brand has a unique story. He once owned a 1969 Ford Mustang he rebuilt with his father but had to sell it to fund an engagement ring. He’s now taking on the unusual and awesome job of rebuilding his former Mustang, art by part, actual size. From paper. From the photos you can see this isn’t a simple bedroom hobby rather Jonathan has gone to the great effort of printing out the blueprints to the car on a large scale inkjet printer. From there he cuts out the part and puts it together. The team over at Jalopnik managed to speak with Jonathan earlier this week. Here is what he had to say. “The car is being shown in a slightly unfinished state. I have been working on it for 2 years which includes drawing the car and parts in 3D on my computer as well as the printing, cutting and folding. I drew everything; undercarriage, brakes, suspension etc, but realized that to make all the internal mechanicals this could become a life-long project so chose to focus on the more visible and personally significant pieces. I haven’t ruled out making the missing pieces but this project is more about my experience and connection with the original car rather than a complete diagrammatical inventory of a 1969 Mustang. Also the details of the car are based more on my memory of the details. I no longer have access to the car and chose not to use a surrogate to measure. I like when things are slightly wrong, just like my memories can be slightly off. This is my first time working with these materials. One thing that is important to me as an artist is to always use new materials. I learn something new with every project and rarely repeat it. As far as making a statement, I have been overwhelmed by the online reaction to this work and it’s really great to connect with such a wide range of people. My intention with creating existing objects is to reclaim things that are lost for myself and create new experiences out of my past. The original car didn’t run, I never drove this one. Its body and interior were refinished but not its mechanicals. We restored 2 others that were complete restorations but this one was never finished so in a way the paper version is just as complete as the original.” The level of detail is just staggering and I can only imagine how long each part takes. If you want to see it in person the car is being shown at the Hosfelt Gallery in New York City. Pics courtesy of Jonathan Brand and Jalopnik [gallery]]]>

One thought on “This Mustang Is Made Entirely From Paper”